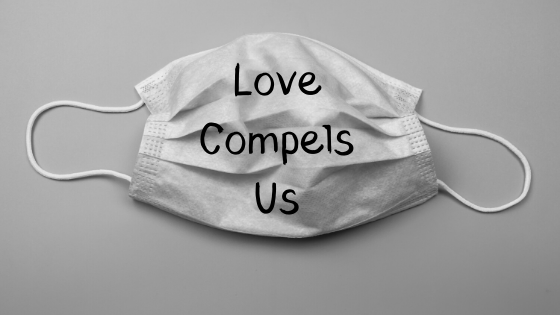 When Moses came down from the mountain after meeting with God, Exodus 34:29 tells us that his face shone with what can only be described as the afterglow of the glory of God. Now I think for many of us, such a wonder would be worn as a badge of honor; an amazing demonstration of God's presence and power among us. If nothing else, you would think it would have confirmed Moses' leadership among a people who had more than once wanted to string him up and head back to Egypt. But Exodus 34:30 tells us that when Moses discovered that the glow of his face frightened the Israelites to the point of their not wanting to be around him, he chose to veil his face - that is, put on a mask - except for those times when he was either speaking with God or communicating for God to the people. The rest of the time he walked around camp with his face veiled. Not because he had to. God had not spoken to him specifically about this. But because he chose to as an act of love and compassion toward a frightened community. Love compelled him to think of their concerns first.

These days of pandemic have raised all kinds of weighty issues and questions in our culture and country. How do you choose what to do if you can't figure out who to trust to tell you the truth? What are the limits of governmental power in a free society? What risks are acceptable for the "normal" functioning of our society and economy? These are all huge questions and there will surely be well-reasoned opinions on every side of each issue, even in the Church.

But there are other issues that are not nearly so weighty that have people up in arms as well, not the least of which have to do with the social distancing being requested in some states and demanded in others. These issues often get lumped in with the larger ones in such a way as to cause divisions on account of them, even though they are small things in and of themselves. Thus, the question of wearing masks, keeping a six-foot distance from someone else and refraining from common expressions of affection, like hugs and handshakes, can suddenly become highly charged and divisive.

Which brings me back to Moses. His first thought was not politics or his rights or how foolish the people were being concerning the glow on his face. Rather, his first thought was for the community of which he was a part. He was concerned for their fears and didn't want this unusual circumstance to stand between them. In many ways, he reflected the same attitude Paul encouraged among the Philippians when he wrote:  "Do nothing out of selfish ambition or vain conceit. Rather, in humility value others above yourselves..." (Phil 2:3). Moses put love first, and as we have seen multiple times in our study of the book of 1 John, we are called to do the same.

Whether we believe masks are necessary or not, whether we think they represent something more nefarious or not, and even if we just plain don't like the idea of wearing them, love for one another compels us to "mask-up". Because in the end, we are not wearing our masks to protect us; we wear them to protect others. It is for this same reason that we will need to refrain from hugging or shaking hands for just a little while longer.

One day we will not have to concern ourselves with any of these inconveniences and irritations. But until that day, let us be diligent in caring for those who are vulnerable and/or frightened. For it is love that compels us. And if you think differently, or would just like to express your frustrations, please do me the honor of calling me to let me know. While families may not always see eye to eye on every issue, a healthy family is a place where it is safe to share our differences, knowing that our love for one another is secure in Christ.